Offering an identifiable narrative layered within a satirical mix of otherworldly fantasies, Raptor Boyfriend: A High School Romance casts the player as teenage girl Stella as she navigates three possible relationships with diverse non-human crushes. Hand-drawn illustrations drive the unconventional tale, while collectibles and multiple endings extend the experience beyond the typical bounds of the visual novel genre.

Raptor Boyfriend: A High School Romance is originally developed by Toronto-based indie team Rocket Adrift and has been ported for consoles by Ratalaika Games in close partnership with Eastasiasoft Limited. Digital pricing is set at US$13.99 / €13.99, with an additional 20% launch discount available on Nintendo Switch and Xbox platforms for a limited time following release.

Take the role of Stella, a teenage girl who moves to a small town only to discover that it’s a secret community of cryptids. Determined to try to fit in during her final year of high school, Stella wants to make new friends and hopefully find romance, but it won’t be easy. Guide her decisions and interactions across a graphic hand-drawn adventure filled with drama and comical situations. Earn collectibles by remembering key details from conversations with your crushes.

Amongst the possible love interests, three cryptid teens lead the pack. Be charmed by Day, the magical fairy and self-deprecating artist, but watch out for her spooky ghost ex-girlfriend who seems determined to scare you off! Reunite with your childhood friend Taylor, the mysterious guitar-playing sasquatch while avoiding his band drama. Or finally, meet Robert, a fun-loving, dirt biking dinosaur who may or may not pull a prank on you at any given time. He's all about the present, but his past is catching up to him. Make choices like who to call after school, who to drop off last, who to cheer up during the holidays and more to decide which cryptid you end up with. How will you spend Stella’s precious days?

Rocket Adrift is a Toronto-based indie game studio made up of game designers Sloane Smith, Lindsay Rollins and Titus McNally. The developer’s stated mission is to tell personal narratives that highlight the perspectives of LGBTQIA+ and BIPOC experiences while also showcasing an outsider lens into Canadian culture. The teams aim to emotionally enrich underrepresented players through gameplay and storytelling and endear others to the struggles of diverse characters with humor and unflinching honesty. 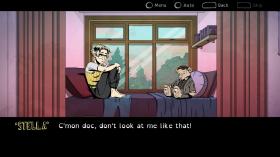 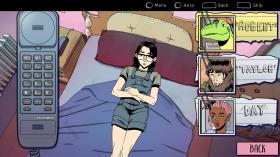 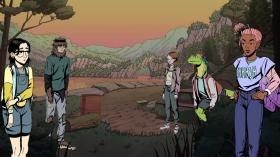 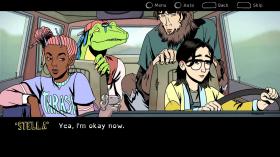 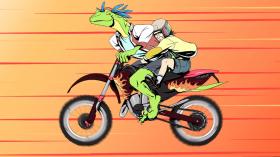