Escape Paradise - Lost Sea Coming to Nintendo Switch on May 31

Hong Kong - May 17, 2018 – Eastasiasoft Limited, the independent developer and publisher of interactive entertainment, today announced that their explorative action-adventure game Lost Sea is launching on Nintendo Switch on May 31. Set against the mysterious backdrop of the Bermuda Triangle, Lost Sea tasks players with making a daring escape by navigating a series of deadly, procedurally generated islands.

The Nintendo Switch version includes all the updates from other platform releases and features a more beginner-friendly difficulty level. Lost Sea will be available on the Nintendo eShop worldwide on May 31 for a price of US$9.99 / 9.99€ / ¥980. Digital pre-orders will be available from May 17.

To coincide with the news, a new trailer has been released, and can be viewed here. Further information on Lost Sea can be found on the game’s official website, and in the full press kit.

Lost Sea is an explorative action-adventure game set inside the perilous environment of the Bermuda Triangle. Select your hero and recruit a ragtag crew of survivors who can help you navigate the hazardous island chain. Scour each island for the mysterious tablets you need to navigate the waters of the Lost Sea and venture closer to the mysterious portal, that you hope, will transport you home.

EXPLORE! Uncover an archipelago of unique islands as you explore the Lost Sea. Fill in your map as you chart a range of environments, from lush jungle to arid desert or icy tundra, there are millions of different islands to discover.

BATTLE! Encounter an array of dangerous critters previously lost to the mists of time. Each biome features a different set of critters, each with their own attacks and behavior patterns.

ADAPT! Develop your skills as a survivor as you learn powerful new player abilities and special moves. Scavenge the islands for treasure to buy upgrades for your ship to assist with your journey.

LEAD! The archipelago is inhabited with a large cast of stranded, each with their own traits and abilities. Crew members can perform a number of vital tasks, from assisting with combat to unlocking new areas of islands.

SURVIVE! The world of Lost Sea is a dangerous and unforgiving place. Use your trusty machete to protect yourself, and your crew, as anyone unfortunate enough to die from creature attack or a trap won't be coming back.

ESCAPE! Not everyone in the Bermuda Triangle wants to leave. Battle powerful bosses hell-bent on stopping you from making it to the portal alive.

Lost Sea has been rated Everyone 10+ by the Entertainment Software Rating Board (ESRB). Please visit www.esrb.org for more information about ratings.

© 2017 Nintendo. Nintendo Switch and Joy-Con are trademarks of Nintendo. 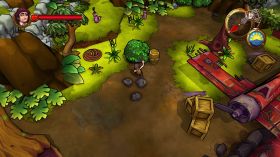 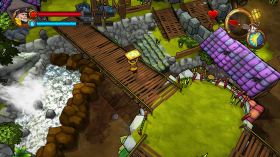 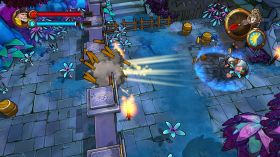 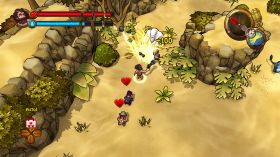 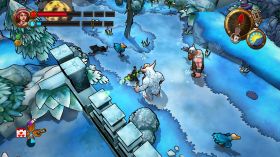